I’ve settled on the Road Kill playset for my mashup writing journalling project. Now it’s time to roll them dice and build a setting by applying to rolled results on the tables found in the playset — Relationships, Locations, Objects, and Needs; and their details.

After toying around for a bit, I decided that three (3) characters is enough for the first time around. That means I’ll end up with three relationships between them, and one detail to each relationship (one Location, one Object, one Need). So, I’m sticking with the basic rules from the Fiasco book.

Long story short… here are the results from rolling twelve dice (four dice for each character): 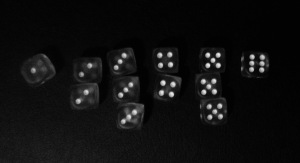 In case the image doesn’t load, the numbers rolled are:

It’s always hard to say whether a roll is good or bad, but it looks pretty well distributed. Of course, you’ll never know until you start applying them dice to your tables, which is when you realize that you don’t have the right combination of numbers to make it all work the way you like, and you need to figure out things you’d never consider otherwise. Which is the fun part about Fiasco.

So, I went right into the tables, moving dice around and hoping for some nice outcomes. The finale result looks like this (remember that the last die places can be any number, marked by an *):

(If you want to read along, here’s the link to the playset Road Kill)

Well. That looks pretty bad. Something about drugs, and a wedding, and a car crash… To illustrate how I put that all together, I used Scapple for Mac, and this is the result:

As you can see, I already inserted names. Now these people begin to come alive, and I can start giving them a sort of premise to work with, which looks something like that (remember, we’re talking about people with high ambitions and low impulse-control):

Mitch and Sarah just got married and are on their way to the airport to go on their cheap, last minute flight to their honeymoon.

It was Mitch’s idea to ask Sarah’s dead-beat step-brother to drive them, because Nathan and Mitch are old buddies. They also sell drugs together.

They use the drive to the airport as excuse to go to a big-time sale—2 kg of cocaine from their supplier to a guy in a remote location. They were supposed to drop it off earlier (on the same day as the wedding!), and be back in time for the ceremony. But thanks to Nate’s well-planed bachelor party, they drink all night and sleep in. Now they have to get it done after the wedding, and before the flight to the honeymoon–else there won’t be any money to celebrate for the newly wedded couple. All they have to do is drop of the drugs, get the cash, and the newly wedded couple will be on their way to paradise.

What could possibly go wrong?

That concludes that part of the setup. Next, I will look into establishing an outline for the first act, where each character gets two scenes to play out this fiasco, hoping to somehow get out on top of it all.

I’m pretty happy with how this turned out, and once I begin to write the scenes, I’ll be using the Writer Emergency Deck to go deeper into the possibilities of the narrative.

Let me know what you think, and how you would have used the playset with the dice rolled as they were.

Procedural Storytelling (or: the promise of Ironsworn: Starforged)

Something went wrong. Please refresh the page and/or try again.