One more scene, ladies and gentledudes, and the first Act of the Honeymoon will be over. And we already set up the next act with a disaster, even before we introduce even more terrible elements through the tilt table (it’s a Fiasco thing).

The last scene of act 1 will play out during the actual wedding and should end on a high note just for the hell of it. In the present time, blood has been spilled, bonds broken, the past came back to haunt, and the future looks so very bleak. So why not party?

Because two kilograms of cocaine need to be delivered ASAP! 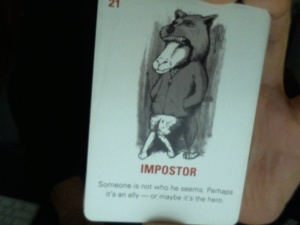 Someone is not who he seems. Perhaps it’s an ally — or maybe it’s the hero.

So many ideas come to mind. Is Mitch not who he seems? Is he hiding something? Or is it Sarah, that has a terrible secret in her past?

Everyone wears masks, but some characters go much further, pretending to be someone they’re not.

Some deceptions are spontaneous and unplanned (pretending to like jazz), while others require extensive training (a deep-cover spy). Some characters forget who they really are.

The life of an impostor is dangerous — every moment caries the risk of the ruse collapsing. What are the consequences of being discovered? Who gains from the lie being revealed?

My very first idea is relatively mundane; I already establish somewhere in the setup that Sarah only acts like a good and quiet girl because she has no choice. So. Her going off and showing some of her true colors when she finds out just why Nathan and Mitch are so nervous about “being late” could make things interesting. Maybe Mitch falls in love with her all over again, seeing what a wild girl he just married.

Another idea, of course, is Mitch having a, perhaps hidden, dark past. After all, we know he grew up in a messed up household, but not much more so far. Maybe he’s running from something. Maybe he’s a really bad guy, murderer or worse. His plans of settling down could be his way of trying to get away from a dark past. A past that’s now coming back to haunt him. An uninvited wedding guest, maybe? Someone he knew from before. Someone who triggers bad memories and make him become even more nervous about the drug deal.

Maybe working on some of the exercises on the back of the detail card can deepen the ideas we just read about.

Imagine your hero’s life is a deception. Who is he really, and why is he pretending to be this character?

List three jobs your hero would be terrible at, then write a scene in which she fakes her way through one of them.

It’s easy to pretend to be someone else online. Brainstorm three ways your hero could be catfished or otherwise deceived.

As I was going through the questions, which I answered poorly, I more and more liked the idea of Mitch being responsible for his father’s death. Maybe his mother knows about it, and her coming to the wedding causes Mitch to really freak out. Which is something Sarah takes the wrong way, of course. And then there’s Nathan nagging him to hurry this party along so they can go and drop the drugs off hours too late already. Add to that a pinch if Sarah’s step-mom being all wedding-OCD, making it hard to get away, and we have a nice, fierce, confused, with a dash from a dark past, ending to the first act.

Since this is the last scene for this act, you can look forward to some special content this week regarding some elements entering the narrative before act 2 begins next week. What elements? Bad elements. That kind. Stuff might be set on fire. Innocent bystanders might catch a bullet. Secrets will spill, motives will clash, pain will follow deceit.

Any ideas, thoughts, comments? Would you have done anything differently?

And go check out all the wonderful people supporting me and my Patreon Campaign.

Not Approved For All Audiences. It says what it does. Beware of language. Not tasteless, usually, but strong.
Follow untraum on WordPress.com