While I’ve been able to stick mostly to the outline, it won’t apply to this scene, at all. The reason for this comes from the very first scene already, which I ended essentially the why scene 5 was supposed to end. What encouraged me to that was the first card I drew, causing Sarah to end up fighting the wrong fight, and knocking out Nathan right then and there.

But first, look at what scene was supposed to be about:

NOW — Him and Sarah running away from the scene. They can’t outrun cars on the road, but off-road, with its rocks and boulders, they might stand a chance to hide. They’re dragging the case with them, and it feels heavier by the minute. And of course they argue. One of them will end up knocking out the other, while the people chasing them begin to catch up on foot.

As you can see, the story veered off that path right from the start. Time to figure out something new in accordance with the next card.

But. Before we look at the next card, let’s figure out a new outline for this scene. And this time we have the advantage (or disadvantage) to consider fully developed scenes and elements.

Now we know that, at least as far as Sarah is concerned, things went south because Nathan did something wrong during the drop-off. We also know about the gang, that intercepted the drop-off and caused quite the uproar (scene 3). And we know that Nathan is knocked out in the desert, after Sarah freaked out at him and left with the drugs.

With that in mind, let’s look at the card for the upcoming scene and then think about a new outline for it. 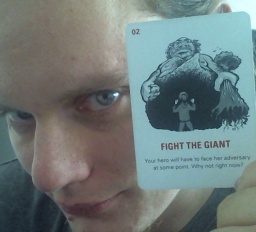 Your hero will have to face her adversary at some point. Why not right now?

Adversary could mean a few things: the drug-mob, the gang, or even Sarah (with regards to scene 1).

We usually think of showdowns coming at the end of the story, but early battles allow for new complications.

A crushing defeat gives your hero something to prove. Does she doubt herself? Will her allies stand with her?

A surprising victory could turn an enemy into an ally, or spawn an even more powerful Big Bad — perhaps the mother or brother of defeated.

Perhaps the gang catches up to the half-conscious Nathan, and thanks to Mitch with them (see scene 3), Nathan will not be killed or beaten to pulp. Instead, they take him prisoner and make their way to get Sarah. In that case, Sarah could be the current enemy (in context of this scene).

Another idea would be to let Nathan get in contact with the mob, forming another search party with them (much like Mitch and the gang), where he secures his own survival by promising them to find Sarah and the drugs back.

Let’s get into the prompts before think about which the two “giants” we go with.

List three ways the enemy could bring the fight to the hero right now.

If your hero has a plan, how can he be forced to accelerate it? Perhaps he learns new information, or a window of opportunity is closing.

Coincidence happens. Brainstorm three ways your hero and antagonist could find themselves in the same location unexpectedly.

One thing I would like to do is having all three characters end up at the same place by the end of this, so when we get into act 2, we can up the stakes with all three involved. Bringing everyone to that one location Sarah is likely to hide out at would accomplish that, and it would cause a stand-off, show-down sort of situation, with our three heroes caught in the crossfire.

The “giant” of this scene would be both the mob and the gang, as well as the stand-off at the end of it.

Any ideas, thoughts, comments? Would you have done anything differently?

And go check out all the wonderful people supporting me and my Patreon Campaign.

Procedural Storytelling (or: the promise of Ironsworn: Starforged)

Something went wrong. Please refresh the page and/or try again.